League Responds to Police-Involved Violence, Demands Accountability for the Sake of Democracy 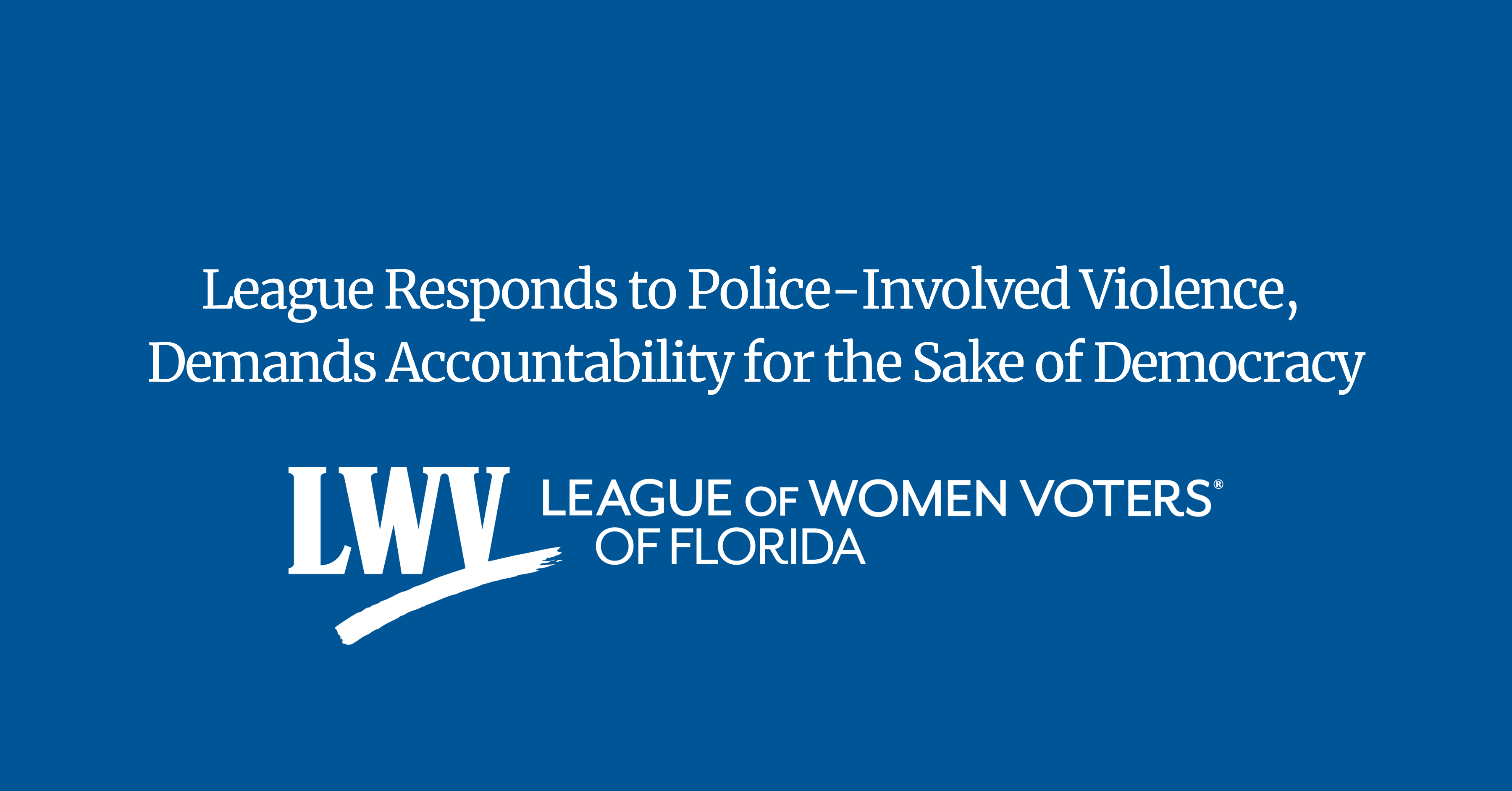 The Board of the League of Women Voters of Florida has issued the following statement:

Florida voters have long depended on the League as “defenders of democracy,” which we view to be our core mission. This leadership role requires us to speak out yet again to stress that our democracy is in deep trouble. Our current criminal justice system has gone unchecked for far too long and has resulted in a system that lacks accountability.

When a group of people have time and time again been made to feel less than, protest is inevitable. The right to join with fellow citizens in protest and peaceful assembly is critical to a functioning democracy and at the core of the First Amendment. Peaceful protest should not be met with militant-like responses like we’ve seen around our nation.

The tragic loss of Black lives to police-involved violence has occurred over too many decades, but we can change that trajectory now. The last several years of this repetitive violence has demonstrated the need for dramatic change. The status quo of police brutality can not be tolerated any longer.

The League knows that voting is one of the most powerful forms of protest. While voting might not be a fix-all solution, voting is an effective way to jump-start meaningful change. The League stands strong in our commitment to creating a democracy where every person has the desire, the right, the knowledge and the confidence to participate in government. We will continue our efforts to register as many people as possible and subsequently provide unbiased information for voters to make educated decisions.

The League of Women Voters, both at the state and national level, acknowledges, painfully, that America is a nation founded on racism. Therefore, all who live in this country must contribute to and participate in organizations actively working to achieve full liberation and inclusive freedom. We must all advocate for anti-racist policies at every level of government.

The League of Women Voters of the United States, which represents our organization nationally, has joined more than 100 organizations, including the NAACP, National Urban League and the Black Lives Matter Foundation, demanding federal statutory reforms on a range of policing issues. These issues include the use of force, police accountability, racial profiling, militarization, data collection, and training.

Within our own state, we will continue to hold elected officials accountable and use our voice to provide concrete action steps for our state legislature while simultaneously pushing local chapters to advocate for policy changes and adaptations at city and county levels.

“Let’s stop thinking that our voice don’t matter, and vote,” said Terrence Floyd, brother of George Floyd, earlier this week. “Not just for the president… Vote for everybody. Educate yourself.”

It is more critical than ever that we, the League of Women Voters of Florida, stand ready to register voters, help voters request their vote-by-mail ballots and provide unbiased election and candidate information.

On August 31, the US Supreme Court declined to rule on a Texas law that bans abortions after six weeks of pregnancy and allows private citizens to sue...

END_OF_DOCUMENT_TOKEN_TO_BE_REPLACED

We hope to bring our signature in-person events back in early 2022!

END_OF_DOCUMENT_TOKEN_TO_BE_REPLACED

TALLAHASSEE, Fla. — One of the first responsibilities of all governments is to protect its citizens from harm. That is an agreement made between citizens and...